April 4, 1919 Ruth Law flew the first airmail to the Philippines. Law had purchased her first plane from Orville Wright in 1912 and operated the Ruth Law Air Show. When WWI broke out she was the first woman authorized to wear an American military uniform. Law made a personal appeal to President Woodrow Wilson asking him to allow women to fly in the Signal Corps but she was refused. She said “Women have qualities which make them good aviators, too. They are courageous, self-possessed, clear-visioned, quick to decide in an emergency, and usually they make wise decisions.” 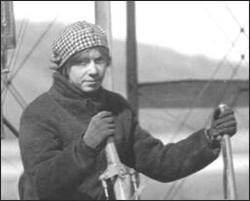