September 16, 1910 Bloomer-wearing Bessica Medlar Raiche, one of the first female doctors to specialize in obstetrics and gynecology, achieved another major first, becoming the first woman in the United States to fly an airplane solo. She and her husband built the plane from bamboo, silk and pieces of a Wright Flyer. They later substituted the piano wire with heavy wire made of iron. 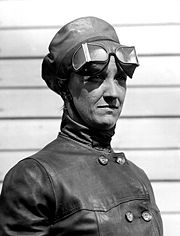