First a confession- between all my spring travel for SOAR, ELINOR! and preparations for the August release of THE MAP OF ME I’ve been so busy I’ve neglected my daily blog posts. But for the next few weeks life promises to be a little more predictable so let’s get back on track… 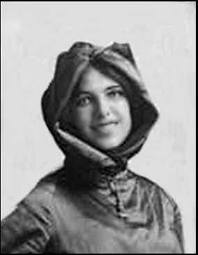 May 25, 2000 A historical marker was erected in Arcadia, Michigan to celebrate the life of America’s first licensed female pilot, Harriet Quimby.

May 28, 1911 Only six months after receiving her license, Jeanne Herveaux debuted her flying show in Lyon, France.

May 29, 1971 Maryse Carmichael, the first female member of Canada’s Snowbirds, was born.

May 30, 1907 Aviation pioneer Elly Beinhorn was born in Hanover, Germany. Beinhorn achieved flying fame in the 1930’s and continued to fly until age 72.

May 31, 1931 Pepsi debuted its “Drink Pepsi” aerial ad. During the 1980’s Suzanne Asbury, the world’s only female skywriter, continued the campaign.

June 2, 1998 Wendy Lawrence, the first female graduate of the U. S. Naval Academy to launch into space, lifted off from Kennedy Space Center.

June 3, 1994 The Canadian Broadcast Company aired SPITFIRES IN THE RHODODENDRONS, a documentary about Canadian women in the British Air Transport Auxiliary. It featured Marion Orr and Violet Milstead.

June 4, 1974 Sally Murphy became the first woman to qualify as an aviator in the United States Army.

June 5, 1999 The space shuttle Discovery landed with Julie Payette onboard.

June 6, 1944 D-day. After the invasion of Normandy women were no longer permitted to deliver planes to combat zones on the continent. Until that time, valiant women like Betty Lussier had secretly flown over Algeria, Sicily, Italy, and France.

June 8, 1985 Carolyn Pilaar was selected to lead the U. S. at the 6th World Precision Flying Championships.

June 12, 2001 WASP Alberta Hunt Nicholson unveiled a plaque in her honor at the Utah Aviation Hall Of Fame.

June 13, 1964 Dee Baer and Fran Gustavson started a Nevada chapter of the Ninety-Nines, the international organization of women pilots and volunteered at the first Reno Air Races. 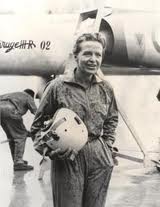 June 15, 2005 Hanadi Zakaria al-Hindi became the first Saudi woman commercial airline pilot. Like other women in her country, she was not permitted to hold a driver’s license.

June 18, 1943 WASP trainee Dorothy Ebersbach soloed for the first time and sent her father a telegram that said “Soloed today. Everything Hokey Dokey. Love, Dorothy.” In April 2010 she was presented with the Congressional Gold Medal, the highest and most distinguished award Congress can award to a civilian.