April 8, 1889 The first woman to fly solo, Blanche “Betty” Stuart Scott, was born. In 1910, Scott had been the second woman to drive a car across country, from New York to San Francisco. Her trip caught airplane designer Glenn Curtiss’ attention and later that year he offered to teach Scott to fly. Curtiss put a limiter on the plane’s throttle so Scott couldn’t actually leave the ground but somehow the limiter failed and Scott took off, flying 40 feet. She was later the first woman to fly long distance, traveling 60 miles and earning the nickname “Tomboy Of The Air.” 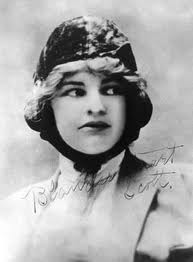