April 27, 1904 Marvel Crosson was born in Warsaw, Indiana. Eighteen year old Crosson and her brother bought a wrecked seaplane for $150, replaced the wheels with parts they bought from a junkyard, and taught themselves to fly. She became a bush pilot in Alaska and set a women’s altitude record in 1929. Later that year she was killed in a crash at the first Women’s Air Derby, amidst charges that her plane had been sabotaged. 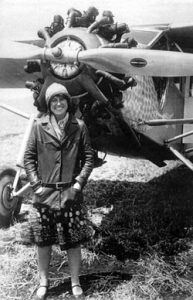