October 22, 1909 “Baroness” Raymonde de Laroche became the first woman to pilot a heavier than air machine. The daughter of a plumber, de Laroche was permanently tagged with the title of baroness by an article in a French tabloid. She was accomplished balloonist when aviator Charles Voison convinced her to pilot his new invention, a fixed wing airplane. De Laroche’s statue stands at Le Bourget airport outside Paris. 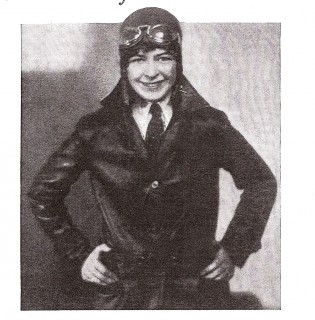 October 21, 1928 Seventeen year old Elinor Smith flew her father’s Waco 10 biplane under the four East River bridges. Beneath the Brooklyn Bridge she flew between a tanker and a destroyer, flipping her plane into a vertical bank to thread through the narrow space. Overnight Elinor became world famous, earning her own radio show, endorsements from goggle and motor oil companies, and a job as test pilot for the Bellanca Corporation. My picture book biography Soar, Elinor! chronicles Elinor’s journey from six year old with her head in the clouds to teen super-pilot. I’ll be signing books on Saturday morning at the Clarendon, Virginia Barnes & Noble.

October 20, 1985 “The Flying Nun” Sister Mary Aquinas passed away. This real life pilot-nun, the inspiration for a movie and television series, taught aeronautics at Catholic University in Washington, DC.

October 19, 1911 Czech Bozena Laglerova became the second woman to earn a German pilot’s license. She was already licensed in Austria. Less than a week later she crashed her plane near Prague and suffered life threatening injuries but she recovered and went on to fly in exhibitions and competitions throughout Germany. October 18, 1937 Jean Batten broke the record for a solo flight from Australia to England, the only person to simultaneously hold the record both from Australia to England and England to Australia. She was made a Commander of the British Empire, received the French Legion of Honor, and was the first woman to be awarded the medal of the Federation Aeronautique Internationale. Glamorous but reclusive, she was known as the “Garbo of the Air”.

October 17, 1956 astronaut and physician Mae Jemison was born. Jemison became the first African American woman in space on board the space shuttle Endeavor in September 1992. Although discouraged by teachers, Jemison majored in engineering at Stanford University and obtained her medical degree from Cornell. Inspired by Sally Ride and Star Trek’s Lieutenant Uhuru, Jemison was accepted into the space shuttle program in 1987, in the first class selected after the Challenger explosion. She went  on to found the Dorothy Jemison Foundation for Excellence which hosts science camps for students ages 12- 16. October 15, 1908 Pilot, reporter, and adventuress Fay Gillis was born. Gillis’s first career was demonstrating airplanes for Curtiss. She later became a star reporter and, as a White House correspondent, covered the Johnson, Nixon, Ford, and Carter administrations. She reported from Hollywood along with her pet leopard Snooks. October 14, 1944 WASP test pilot Ann Baumgartner became the first woman to fly a jet when she piloted a Bell YP-59A. Young Baumgartner was first inspired to fly when Amelia Earhart spoke at her elementary school. She graduated from Smith College and worked as a reporter for the New York Times before joining the WASPs. October 13, 1910 The Aeronautical Society awarded Bessica Raiche a winged medal fashioned of gold and diamonds in recognition of “the nation’s first intentional solo by a woman.”  Their wording was very specific because Blanche Scott had piloted a plane that accidentally left the ground twenty days before Raiche’s flight. Raiche later said “”Blanche deserved the recognition, but I got more attention because of my lifestyle. I drove an automobile, was active in sports like shooting and swimming, and I even wore riding pants and knickers. People who did not know me or understand me looked down on this behavior. I was an accomplished musician, painter and linguist, I enjoyed life, and just wanted to be myself.”