October 2, 1931 Smaranda Braescu lept from a plane almost 20,000 above the ground and fluttered for 21 minutes 25 seconds to win the European Parachute championship.  Elinor Smith flew the first multiple person parachute drop- man or woman- and demonstrated her technique to the U. S. Army. October 1, 1942 Esther Mueller Ammerman soloed. She was Nebraska’s only female licensed parachute rigger and later flew the B-26 Marauder for the WASPs. 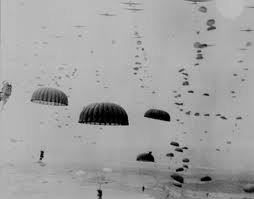 September 30, 1911 Harriet Quimby published an article called “Flying Not So Dangerous As It Seems” in Colliers Magazine. Over the next twenty years many popular magazines featured aviation columns written by women pilots. Amelia Earhart wrote for Cosmopolitan. Elinor Smith published articles in St. Nicholas, Liberty and others, and hosted a weekly radio show on NBC. September 29, 1976 Twenty women began undergraduate pilot training at Williams Air Force Base. They were the first women to be trained to pilot military aircraft since World War II. In 1991 Congress lifted the ban on women flying in military combat. Now women can learn to operate any aircraft in the Air Force arsenal. September 28, 1942 Life Magazine announced that Nancy Harkness Love, director of the WAFS,  was one of six women in the public eye with “beautiful legs”. Educated at Milton Academy and Vassar, Love learned to fly at age 16. She was awarded the Air Medal for service during WWII and was the first woman to fly around the world. September 25, 1912 Bernetta Adams Miller became the fifth American woman to earn a pilot’s license. On October 5, less than two weeks later, she was selected by the Moissant company to demonstrate their Bleriot monoplane to the United States army. When asked why she was chosen she later said “I suppose that this was on the basis of the idea that if a mere woman could learn to fly one, so surely could a man.” September 24, 1929 Aviation pioneer Jimmy Doolittle made a completely blind flight- take off, flight, and landing without visual aids. Earlier that year, flying his own plane alongside, Doolittle ushered aviatrix Elinor Smith to the ground for a dangerous nighttime emergency landing.

And it’s my birthday! September 23, 1938 Glamorous Jacqueline Cochran crossed the finish line of the cross-country Bendix Race on fuel vapors becoming the first person to fly the race without a refueling stop. Cochran, called the “Speed Queen”, was the first woman to break the sound barrier, the first woman to fly a jet across the ocean, and the first woman to fly a bomber across the Atlantic. Along with Eleanor Roosevelt, she advocated for including women pilots in the military. In 1943 she became the director of the Women Airforce Service Pilots (the WASPs).