September 12, 1935 Laura Ingalls (the aviatrix, not the prairie girl!) flew non-stop from Union Air Terminal in Burbank, California to Floyd Bennett Field in Brooklyn, New York. The trip took 13 hours 34 minutes, five and a half hours faster than Amelia Earhart’s 1932 record. Two years later Ingalls was arrested as a German spy and sent to Alderson prison (the jail that later welcomed Martha Stewart.)

September 11, 1911 Hilda Hewlett, aka “Grace Bird”, Britain’s first female pilot, flew her Farman Pusher biplane in an airshow at Chelson Meadow in Plymouth, England. Fly Bird, fly! She later taught her son to fly and separated from her husband Maurice after he said “Women will never be as successful in aviation as men. They have not the right kind of nerve.” 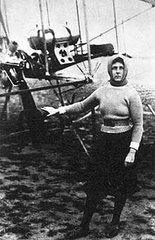 September 10, 1951 Claire McMillen Walters won the All Women’s Air Derby in Detroit, Michigan and married her husband Mike Walters on the return trip to California. Called “Flight Instructor To The Stars” Walters owned a successful flight school in Santa Monica, California and was a founder of the Ninety-Nines Museum of Women Pilots. Claire Walters passed away in January, 2010. 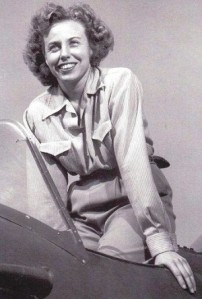 September 9, 1923 The world’s first African American woman pilot, Bessie Coleman aka “Queen Bess”, performed loops, figure eights, and near ground dips before an audience of over 10,000 at a Columbus, Ohio airshow. 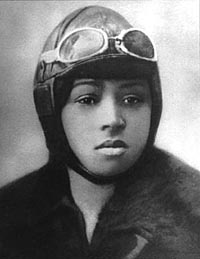 September 8, 1920 Wingwalker Ethel Dare was banned from the air after a male wingwalker was killed attempting a stunt Ethel had mastered. 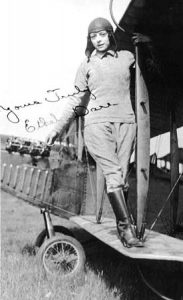 September 7, 1931 Florence “Tree Tops” Klingensmith won four events in the National Air Races. The next year she would come back to win the Amelia Earhart Trophy.

September 6, 1948 Blanche Stuart Scott, the first woman to fly a plane solo, became the undisputed first woman to ride in a jet. Chuck Yeager piloted the TF-80C in a series of snap rolls and a 14,000 foot dive.

September 5, 1936 Although her fuel line had frozen Beryl Markham brought her Vega down in a Nova Scotia peet bog and became the first person to fly solo from England to North America. She greeted two stunned fishermen saying “I’m Mrs. Markham. I’ve just flown from England.” Her memoir West With The Night is an aviation classic.

September 4, 1936 Louise Thaden and Blanche Noyes became the first women to win the Bendix Trophy, flying from New York to Los Angeles in 14 hours and 55 minutes in a Beechcraft model C-17R “Staggerwing,” beating a full field of male pilots. 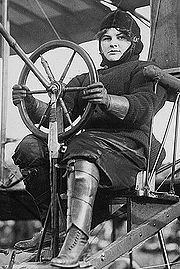 September 2, 1910 Blanche Stuart Scott became the first American woman to fly solo–sort of. Scott was renowned as the second woman to drive a car across the U.S. when she took flying lessons from aircraft designer Glenn Curtiss. Scott was instructed to taxi the plane which had been fitted with a regulator to keep it on the ground. Yet the regulator failed–or Scott maneuvered to lift off. The plane left the ground and flew forty feet. The Aeronautical Society of America refused to recognize the flight and credited Bessica Raiche with the first flight by a woman on September 16.