August 23, 1916 Sculptor, writer and championship bridge player Dorothy Rice Peirce became an aviator when she earned her pilot’s license. Peirce’s father held the patent for the U.S. Navy’s first electric submarine. After a suspicious plane crash, Peirce and her flight instructor became notorious for amorous exploits in the air. 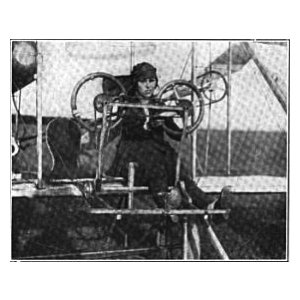 August 22, 1998 Nikki Mitchell and Rhonda Miles landed in Lebanon, Tennessee completing a 49 day round the world flight. The highlight was a recreation on the Flight Of the Rodina, a 1938 flight non-stop from Moscow to the southeastern tip of Siberia.

August 20, 1920 Celebrating the dedication of Curtiss Field, Laura Bromwell broke the world record, looping the loop 87 times. Afterwards she casually dismissed the stunt and posed for newspaper reporters powdering her nose. Bromwell was a member of the Women’s Aviation Corps, a branch of the New York police department.

August 19, 2000 For the second time French pilot Catherine Maunoury was named women’s champion at the FAI World Aerobatics Championship. Maunoury discovered her love of flying when she was only eight years old. She now serves as the director of the Musée de l’Air et de l’Espace, the French equivalent of the Smithsonian Air and Space Museum.

August 18, 1929 With a shot from a firing pistol the Women’s Air Derby, dubbed the Powerpuff Derby by Will Rogers, took off. On the flight from Santa Monica, California to Cleveland, Ohio nineteen female pilots were beset with sabotage like oil poured into fuel tanks and acid cut wing wires, and by disastrous crashes but after nine days of heavy flying Louise Thaden landed her Travel Aire first.

August 17, 2009 Record smashing sisters Kelly and Kimberly Anyadike were honored for their aviation achievements. On her sixteenth birthday, Kelly had entered the Guiness Book of World Records for soloing in four different plane models in one day. Not to be outdone, at age fifteen Kimberly flew coast to coast and back, from Compton, California to Newport News, Virginia, the youngest African-American to make the trip.

August 16, 1912 Princess Eugenija Shahovskaja earned her pilot’s license. She became the world’s first female military pilot when she flew reconnaissance flights for the czar in 1914.

August 15, 1927 Daring wing walker Gladys Roy was killed in a hanger accident. Roy was famed for dancing the Charleston on the top of a biplane with “graceful abandon” and playing a game of tennis on a makeshift court painted on the wing.

August 14, 1909 Lela Cody became the first woman in the world to ride in an airplane. In 1902 she had been the first woman to fly Samuel Cody’s Man Lifting War Kite. Lela and her sons performed in Cody’s Wild West Show. The show included shooting, roping and horse vs. bicycle races.