December 31, 1934 Helen Richey became the first woman to pilot a scheduled airmail flight, traveling from Washington, DC to Detroit, Michigan. Richey had set a women’s endurance record of over ten days with co-pilot Frances Marsalis and won the National Air Meet for Women. December 29, 1932 Ruth Nichols became the first woman pilot of a commercial passenger airline, flying for New York and New England Airlines. Nichols broke many other records, including beating Charles Lindbergh’s record for a cross country flight. During the course of her career she flew every type of aircraft from glider to supersonic jet.

December 28, 1920 Twenty-three year old Amelia Earhart went on her first airplane flight as a passenger, paying pilot Frank Hawks $10 for a ride at the California State Fair. “By the time I had got two or three hundred feet off the ground I knew I had to fly,” she said. A year later she had earned her pilot’s license. December 27, 1970 Astronaut Naoko Yamazaki was born in Matsudo, Japan. On April 5, 2010 Yamazaki flew into space as a member of the STS-131 crew, delivering the Leonardo large module to the International Space Station. She logged over 362 hours in space. December 25 The world’s premier all-female flight crew, commonly known as Santa’s Reindeer, have accomplished another global gift giving mission. The Alaska Department of Fish and Game confirms that Dasher, Dancer, Prancer, Vixen, Comet, Cupid, Donner, and Blitzen are, in fact, Rein-does. “Male reindeer drop their antlers at the beginning of winter, usually late November to mid December. Female reindeer retain their antlers till after they give birth in the spring. Therefore, according to every historical rendition depicting Santa’s reindeer, every single one of them … has to be a female.” Since 1939, the all female crew has occasionally been accompanied by a juvenile male mascot, Rudolf. December 24, 1893 Actress and aviatrix Ruth Chatterton was born. Chatterton was nominated for an Academy Award for her roles in Madam X and Sarah and Son. An avid pilot, she made several transcontinental solo flights and sponsored the Ruth Chatterton Air Derby, a test of precision flying. 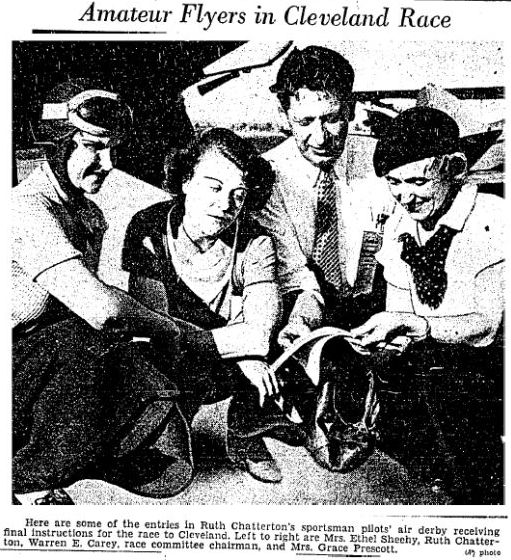 December 23, 1811 Sophie Blanchard, the world’s first female professional balloonist, took off in Rome, falling into a “profound sleep” and ascending to 11,000 feet. Blanchard was nervous and excitable on land but fearless in the air. After her husband’s death in a ballooning accident Sophie had taken over his exhibition business specializing in night flights and an act in which she parachuted dogs or fireworks from the balloon basket.